In Greek mythology, Icarus is the son of the master craftsman Daedalus , the creator of the Labyrinth. Often depicted in art, Icarus and his father attempt to escape from Crete by means of wings that his father constructed from feathers and wax. Icarus’s father warns him first of complacency and then of hubris , asking that he fly neither too low nor too high, because the sea’s dampness would clog his wings or the sun’s heat would melt them. Icarus ignored his father’s instructions not to fly too close to the sun, whereupon the wax in his wings melted and he fell into the sea. This tragic theme of failure at the hands of hubris contains similarities to that of Phaëthon . (from Wikipedia)

Icarus is based on the Billy 2.0 base model and as such all his body parts and facial features can are compatible

with other Billy 2.0 derived characters. Mix and match the body parts to create all sorts of new characters.

Features:
Icarus features a fully functional bow that is easy to animate and look great from all angles.  The bowstring can be turned invisible which when used in combination with the string prop, can be used to animate arrows being shot. Because he is built from the Billy 2.0 base model, all of Billy 2.0 presets, props, and accessories are also compatible with this character.

How To Shoot an Arrow With Icarus

There are no reviews yet.

Only logged in customers who have purchased this product may leave a review.

How to convert the actionscript o …by divulguesites2 months ago

How to install ToonTitan Titan an …by cocojuicekao1 year ago 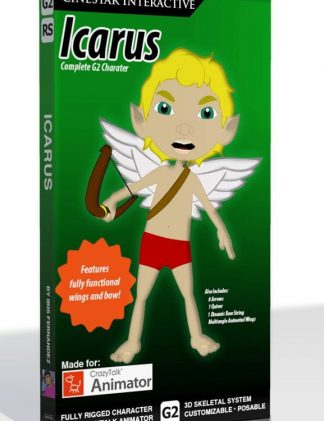